I was pleased to be speaking at the Clojure Exchange recently (at least it was recently when I started writing this blog post). I suggested to Bruce that a talk on concurrency and parallelism would be good because since most of the books were published reducers and core.async have appeared giving us even more options in Clojure and we have a new runtime in Clojurescript (I also ranted that our books get it a bit wrong).

The goals of the talk were:

Slides are here, video here but I will expand on a few ideas here too

Concurrency is not parallelism

It has been said better by Rob Pike in this talk but the definition is:

Concurrency is the composition of independently executing ‘processes’

Parallelism is the simultaneous execution of (possibly related) computations

Concurrency is about the way we structure programs

Parallelism is about the way they run

The nice thing about this definition is it’s then easy to find examples of concurrent but not parallel (running multiple threads on a single core) and parallel but not concurrent (instruction-level parallelism, data parallelism), and even when concurrency and parallelism are both present but to a different extent (running 50 threads multiplexed across 4 cores). 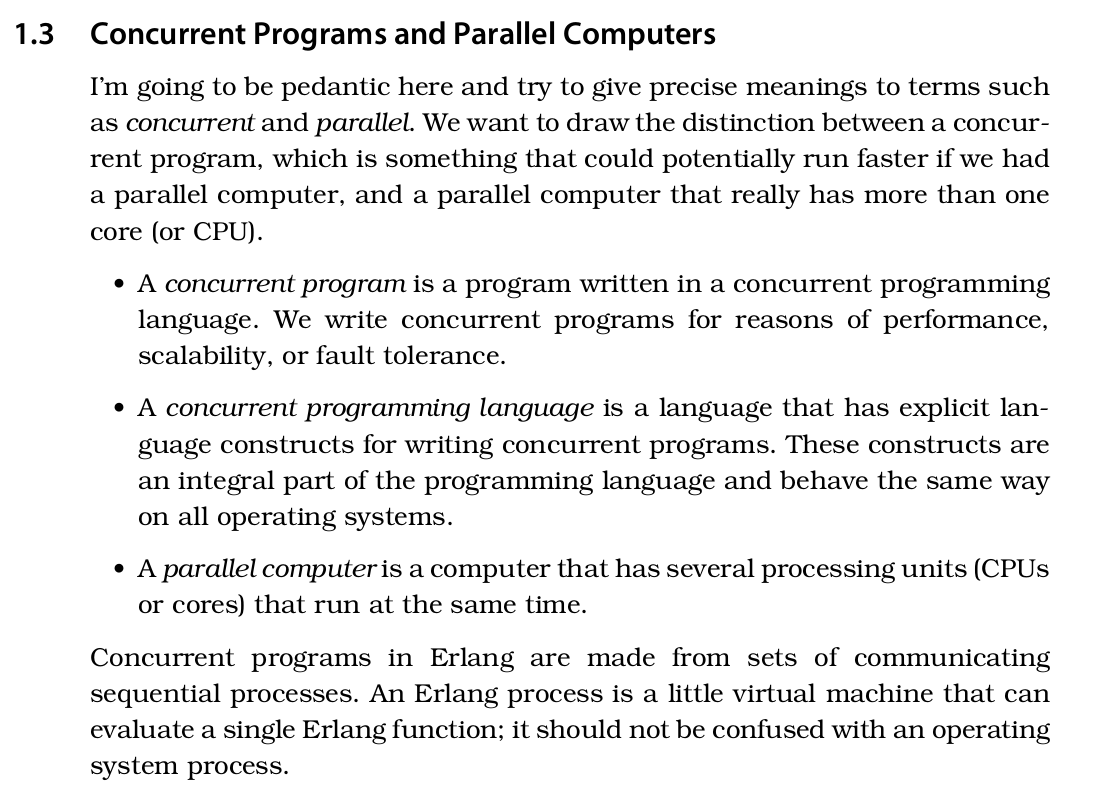 I like this one as it brings out the two main ways of doing concurrency, either by message passing with no shared state or by managing access to the shared state. 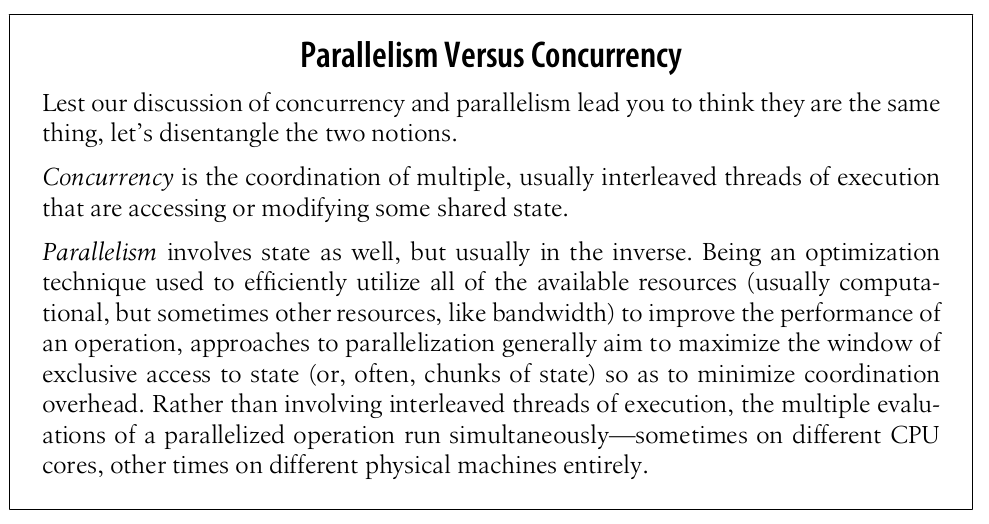 Both definitions assume shared state, though it captures the idea that parallel means running at the same time and that to get the most from your hardware you want to avoid coordination overhead. 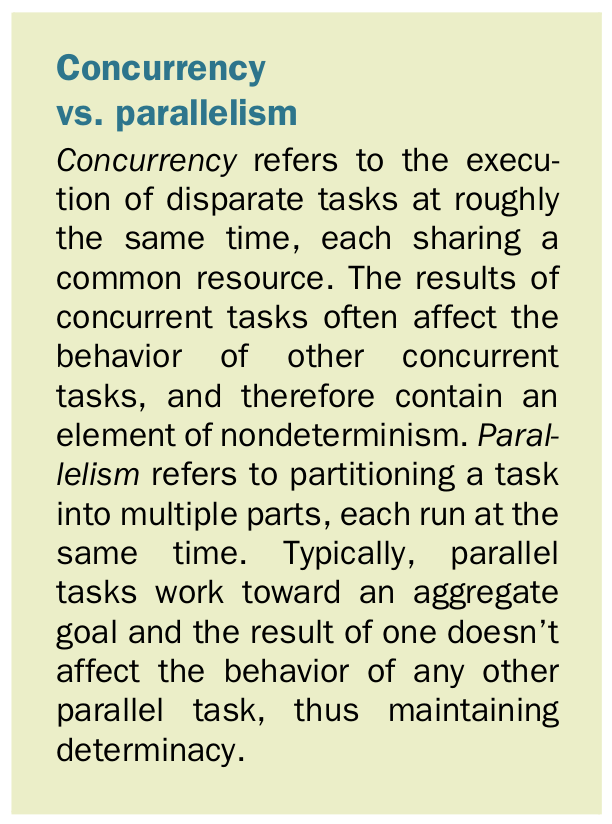 I don’t like 'roughly the same time’ here, and again seems to presume shared state. 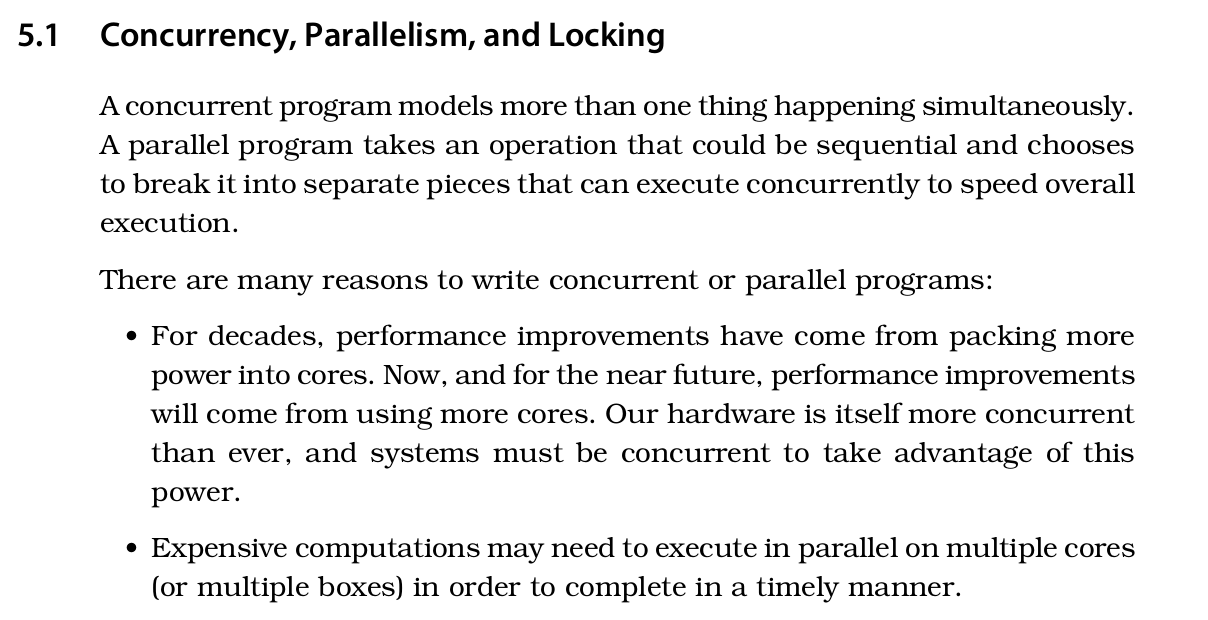 I think that saying parallel programs execute concurrently is wrong (replace it with 'at the same time’ and I think it is right) and the first bullet misuses 'concurrent’ at least once.

This is not to say it is a massive deal and stops people understanding and using the features of Clojure the books go on to explain, just that until seeing Rob’s talk I don’t think I could have given a clear definition of what the terms mean.

Again this was just a refresher and has probably been done better elsewhere.

All can be derefed with @reference or (deref reference)

The main difference between them if they are synchronous or asynchronous, coordinated or uncoordinated.

(Must be inside a dosync transaction)

If we start multiple threads and start writing to the console with println from them, very quickly you start to get overlapping writes.

Here the write function takes something writeable and a string, writes the string to it with a newline at the end and then (importantly) returns the object (this is the behaviour of doto). This allows it to be passed to an agent, this way the value of the agent is always the writer and as the agent serialises application of the functions passed into it the writer is only written by one function at a time.

The guidance for whether to send or send-off to an agent is if the function does any IO or not, send-off is for IO operations and is on an unbounded pool whereas send is for CPU bound operations and is on a fixed-size pool. Either way the message queue is unbounded and you might eventually suffer memory issues (this is one of the reasons core.aync and CSP are better as they provide back-pressure and make you think up front about buffering and queue size)

Thanks to Philip Potter for reminding me to mention that agents are integrated with STM, any dispatches made in a transaction are held until it commits, and are discarded if it is retried or aborted so you can use them to safely trigger side-effects from within transactions. See the docs for more.

So now we have a chance at some parallelism!

So we can do

and it will take 1s or thereabouts.

The actual pmap looks like this, notice the warning that f needs to be expensive enough to justify the overhead

It also has a few friends

You need to call shutdown-agents to exit when the agents/futures are done.

Just pushed the bits I was playing with up to github

I hope that was interesting, I am going to stop for now as it has already taken 2 months to write this. I have already described CSP and core.async here and here so won’t cover that again but I will try and describe reducers (and why reduce is considered harmful) but to be honest you would probably be better just looking at my references from the talk (especially the Guy Steel talk)